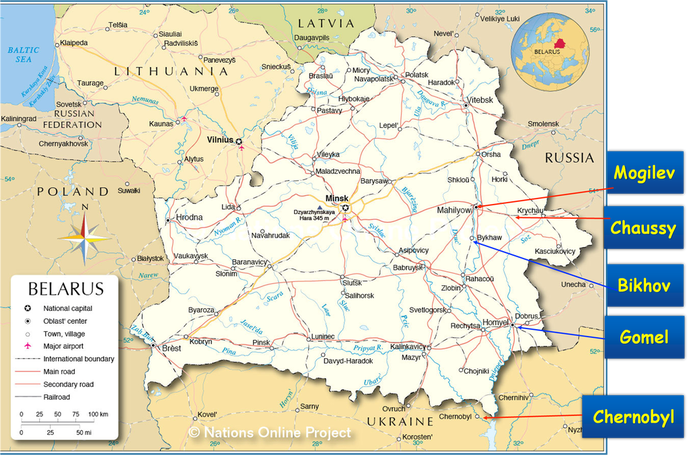 CHERNOBYL
The Chernobyl nuclear power plant lies 65 miles to the north of the city of Kiev in the Ukraine, and close to the border with Belarus.  The map above shows just how close the proximity of our children's homes is to the site of the disaster. On the day of the explosion, the wind direction meant that much of radioactive fallout was directed towards the towns of Gomel and Mogilev.

​Located in northern Ukraine, Chernobyl is a town that is known only for one thing – the world’s worst nuclear accident. In the early hours of 26th April, 1986, an explosion occurred in one of the reactors at Chernobyl’s nuclear power plant, releasing hundreds of tonnes of radioactive particles into the atmosphere.

Newspaper headlines from 1986 (Source: www.focc.org.uk)
In the days and weeks that followed the disaster, hundreds of thousands of people were exposed to extremely high doses of radiation – some front line emergency personnel even received fatal doses. Thousands of people were evacuated from nearby towns (such as Pripyat in the pictures below), never to return to their homes. Most of the radioactive particles contaminated areas close to Chernobyl (such as parts of Belarus, Ukraine and Russia); but radioactive deposits were also blown across much of the northern hemisphere, including the UK.

The abandoned remains of the city of Pripyat, 2 km from Chernobyl. Over 50,000 people were evacuated from the city after the explosion, never to return. A 30 km exclusion zone has remained ever since. In 2017, the site of the Chernobyl disaster (Reactor 4) was encased in a vast sarcophagus (New Safe Confinement) structure that has taken two decades to make and move into place. The 35,000 tonne structure is the largest moveable land-based structure ever built and will make the site safe for 100 years and allow the demolition of the hastily built original cover of the disaster site. This process is slow because of the health and safety procedures used to protect the workers at the still (even 30 years later) extremely radioactive site – for instance, their annual dose can be reached by spending just 12 minutes above the roof of the original 1986 sarcophagus. Chernobyl is still a very dangerous place!

“Chernobyl” is a word we would all like to erase from our memory. It recalls an event—the explosion of a nuclear reactor—which happened in April 1986, opening a Pandora’s box of invisible enemies and name-less anxieties in people’s minds, but which most of us probably now think of as safely relegated to the past…

[M]ore than seven million of our fellow human being do not have the luxury of forgetting. They are still suffering, every day, as a result of what happened… Indeed, the legacy of Chernobyl will be with us, and with our descendants, for generations to come.

BELARUS
The southern border of Belarus is only 15 km from Chernobyl. On the day of the Chernobyl disaster, the wind direction meant that most of the radioactive fallout was directed towards the Belarusian towns of Gomel and Mogilev. Today, over thirty years later, the impact is still very much felt in Belarus – vast areas of the country will never be habitable again because radiation takes thousands of years to degrade, and the radiation exposure in other ‘habitable’ parts of the country continues to have significant impacts on the health of the population. The soil is contaminated; the food they eat is too. There is no escape, no running away. Even now, the children in Belarus receive a radioactive dose forty times greater than permissible levels; this comes both from direct exposure via the atmosphere and from indirect exposure via their food. As a result, they are at greater risk of many types of cancers, particularly thyroid cancer.

So how does FOCC help? More than 500,000 children live in contaminated areas in Belarus, where most live in extreme poverty. Offering these children a break away from the contamination – to eat, drink and breathe cleanly for a few weeks – can boost their weak immune systems and perhaps even extend their life spans. And that is exactly what FOCC aims to do.